Clothes Can Have Purpose, Make A Difference And Bring You Joy - Elisamama Shows Us How 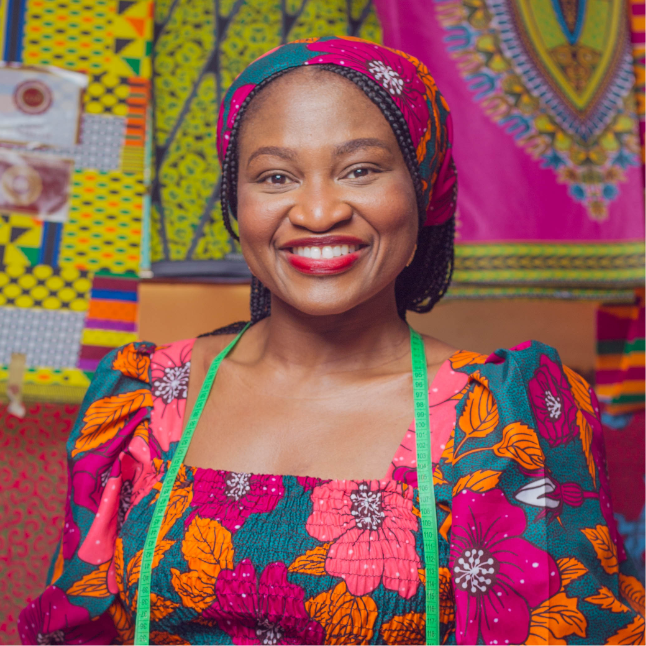 It is no coincidence that her name is Fisayo, a name that means blessing and joy because it is exactly what she has brought to many people with her business, Elisamama.

Now, the founder of a children’s clothing brand, Fisayo had never really had a particular love for fashion before. Her relationship with it was more of a practical one - a tool that supports her needs, makes her happy and depicts how she wants to present herself to the world. After being born in Europe, Fisayo grew up in Nigeria with her modeling and entrepreneur parents who taught her a lot about the value of hard work, commitment, humility and charity. Although Nigeria was the anchor for her upbringing where she had a relatively comfortable, typical middle-class life, she always sensed from a young age that it was a place where dreams were often dashed. So, when the opportunity came to live abroad, she took it, and years later established a business that makes a difference in her hometown.

During a trip to Nigeria in 2018, Fisayo went to the market to buy fabric with the intention of working with seamstresses to make her daughter, Elisa, some outfits. When they were finalized, she noticed how different they were from anything she could ever get in the United States. They were functional, beautiful, well-crafted, and  joyful. Excited with the outfits, she went back to buy more fabric and in the process of making them, Fisayo got to know the seamstresses and bond with them as women, as mothers, and as wives. She saw that despite how talented they were or how hard-working they were, they still struggled financially. Touched by the stories she heard and very content with how the outfits turned out, the idea to start Elisamama to help the artisans and also share these beautiful clothes with people, was ignited.

Making a difference is easier said than done. But Fisayo was able to really aim for changing the lives of the people she worked with and see these changes unfold in tangible ways. With nearly three years being a business, Elisamama has been able to pay their staff above living wage, accommodation, paid time off, and annual bonuses. Through their job, the seamstresses are now putting food on their table, their kids are going back to school, and for the younger ladies who have had no education or career path, this job has given them an opportunity that pays them well, preserves their dignity and gives them a pathway for career growth.

But what happens when your passion and desire to make a difference speaks louder than your business itself? In the early days, Fisayo only brought in seamstresses whose stories deeply moved her and that she wanted to change. However, sometimes their work was not up to par with the quality they required to provide value to their customers. While her heart was committed to keeping them on, after several failed attempts to improve their work, Fisayo’s more logical side reminded her that she could keep them on and create sub-par products or she could let them go and create products that not only afforded them business success but the opportunity to have a long-lasting impact and touch more lives. Her business is what actually makes it possible to fulfill her passion so she needed to ensure her  passion didn’t compromise the business.

The seamstresses’ lives were not the only ones that changed. For Fisayo, becoming an entrepreneur has been the greatest learning and transformational experience of her life. For starters, it changed her way of being so self-reliant. After going through everything she did with starting her own business, Fisayo has learned of the importance of community and now sticks to the proverb: if you want to go fast, go alone. If you want to go far, go together.” Entrepreneurship has also empowered her to speak up and to never be hindered or afraid by the word “no”. Now, rejection, in her mind, is simply interpreted by “not now” or “try again”. With the work at Elisamama, charity and giving back have also become a common topic and priority in Fisayo’s home with her family and children.

It is often said that, “Nigerians are the happiest people in the world.” To that claim Fisayo says: “I have no empirical evidence to back that up but whether or not we are the happiest people, the reality is that Nigerians are an optimistic and proud people. I suspect the joyful, vibrant clothing has a lot to do with that mindset. I mean how could you not be uplifted with those colors? With the shift to neutrals in the last few years, I think we in the U.S are missing the opportunity to leverage the joy our clothes could offer. When people interact with our Elisamama clothes, the most common adjective they describe it with is “joyful” - our clothes give them joy! With the heavy state of things in recent years, we all could absolutely use more joy.”

Elisamama’s clothes are ultimately a conversation starter. It broadens horizons and takes their customers to places they have never been before. Everyone who owns an item from Elisamama, owns a story. A story that begins with a piece of fabric from the hectic and lively markets of Lagos, hand sewn by a seamstress with a life story much different than their own, made its way into their closets and are worn by someone who now knows a little bit more about a place far, far away. And for that, Fisayo is incredibly proud and glad she can be the facilitator of this journey for people through Elisamama.

All photos courtesy of Fisayo Che
To learn more about Elisama, visit elisamama.com

CHECK OUT OUR WORK FOR ELISAMAMA HERE 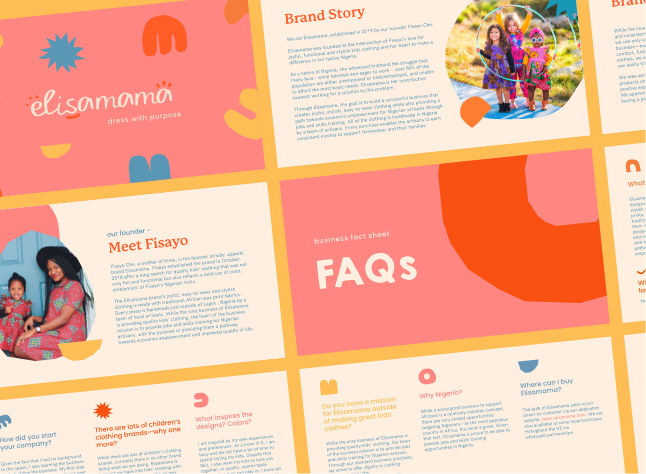 “Entrepreneurship has empowered me to speak up and never be afraid or hindered by the word “no''. Rejection in my mind is simply interpreted as “not now” or “try again”.
Fisayo Che, Founder of Elisamama